Sarlospuszta - Hungary. Summer 2019 ...
after an hour of flight and a quick trip by car, we reach Sarlospuszta, a quiet Hungarian town close to Budapest, where the European Muzzle Loading Championships have started a couple of days ago.

As soon as we arrive on site, we are greeted by smiling faces and cordial handshakes; in the background, to welcome us, the familiar roar of black powder shots. We understand immediately how much this 18  th  edition, which wears the colors of MLAIC, is unfolding in the best way. Leaving your luggage at the reception, we set off towards the shooting ranges, immediately meeting the first athletes. The number of participants is important, 273 shooters from 19 countries, to challenge each other in multiple disciplines both on fixed targets and in clay shooting. The atmosphere is jovial, along the course and at the shooting stands, we have the opportunity to exchange a few words with the people, everyone agrees in praising the work of the Hungarian staff, captained by friend Balazs Nemeth, shooter, historian and great coordinator.

Around us, a frenzied activity and a pleasant buzz that, however, ceases almost instantly after the announcement of the Range Officer, the next shooting session is about to start.

The faces of the sportsmen become serious, concentration takes over and the shirts with national colors give way to structured jackets of technical manufacture. Yes, because muzzle loading is culture, folklore and the pleasure of being together, but it is also sacrifice, discipline and mental order; here, today, real precision shooting is done and the results will speak for themselves.

The shooters take place, in front of them, maniacally arranged, the fundamental components for the construction of the shot, powder, bullets, priming capsules.

Only an orderly loading action, disciplined by grueling training sessions, will be able to return the speed sufficient to manage 13 shots in just 30 minutes.

The results, at the end of the race, are very respectable. The average of the top 10 scores is 98.5 and the first classified will take the victory with an impressive 100 out of 100. The competition I am talking about is called Vetterly, a long gun, percussion shot in standing position at a distance of 50 meters, without any support.. The winner is the German Walter Massin, already World record with 150/150, on the podium with a Bristlen Morges rifle of our manufacture. 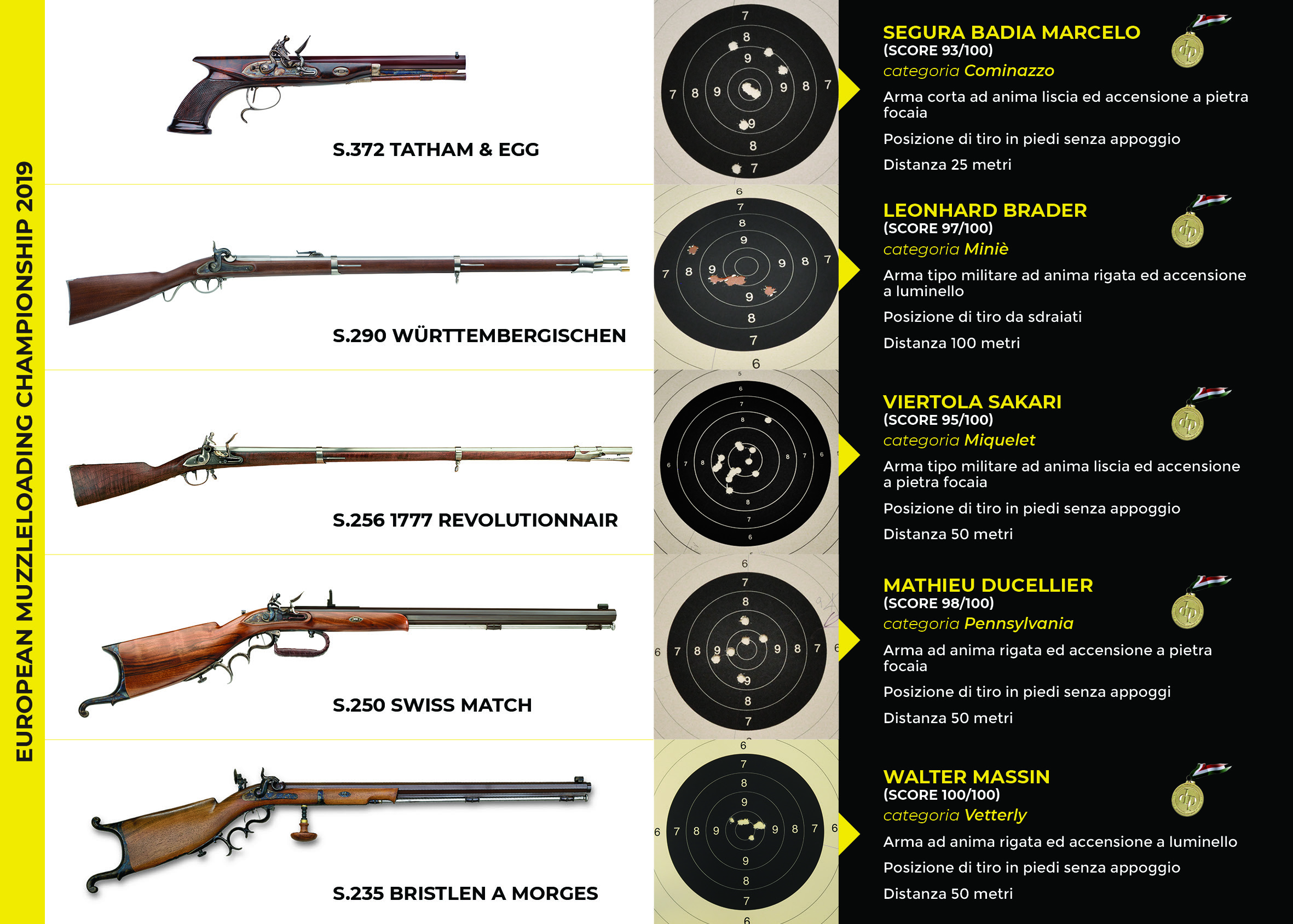 (For the sake of explanation, the international MLAIC rules forecast 13 shots of which only the best 10 are counted. The world record was achieved during the championship of Germany, where the available shots are 15 and all are included in the total count).

Over the five days of competitions, 19 races took place.

As producers and main sponsors of the event, we hoped to be able to admire as many Pedersoli guns as possible; our hopes were not in vain.

At the end of the games, our medal chart will count 15 gold medals (including 7 individual), 8 silver and 12 bronze.

The beauty of attending the event live enabled us to participate the joy of victory, as when Franz Lotspeich won first place with 43 targets shot in the Manton discipline, without forgetting (sorry for the parochialism!) the results of the Italian team that won third place, all with Pedersoli guns ; a classic clay pigeon shooting competition, complete with a call microphone and high visibility orange targets, but with the only difference that the shooter used the reproduction of a mid-nineteenth-century shotgun, rigorously loaded with black powder, whose ignition is entrusted to a flintlock. A good answer to those who question the speed and accuracy of these weapons. Staying on the subject of skeet shooting, forgive a bit of parochialism in my wanting to mention the Italian shooters, winners of the bronze medal in the team category .. How not to acclaim the other gold medals, the Finnish Viertola Sakari first in the Miquelet discipline with a 1777 musket and a score of 95 out of 100, the French Mathieu Ducellier, gold medal in the Pennsilvanya discipline with a Swiss Match rifle and a score of 98 out of 100, the German Leonhard Brader, winner of the Minie discipline with a Mauser rifle and the score of 97 out of 100, again Franz Lotspeich, absolute winner in the clay pigeon / R with gold also in the Lorenzoni discipline and a Mortimer percussion shotgun, also in this case the Italian Boni conquered the bronze with a Gibbs cal. 12 and Segura Badia Marcelo, Spain, who managed to take our Thatam & Egg pistol, the latest of our flintlock models, to the top step of the podium.

In short, great emotions and a lot of satisfaction.

However, the surprises were not over yet, as in the queue for the senior events we moved on to the junior categories, where young and under 16 shooters were able to show great discipline and excellent preparation, always in the name of great sportsmanship. .

We had thus reached the end of a wonderful week, lived under the banner of friendship and healthy competition; the friend Balazs together with his wife Brigitta nevertheless wanted to reward us one last time with the organization of a refined closing dinner, complete with a show, traditional cuisine and fireworks. What can I say, if not thanks to the entire Hungarian staff, to all the technical support and obviously to the 273 athletes who once again proved their worth, both on and off the shooting range.